Bernedoodles are created by the parent breeds- Bernese Mountain Dog, Poodle, and we also use Australian Labradoodles. The Bernedoodle is gaining in popularity due to its fabulous temperament, intelligence, loyalty, beautiful markings, and low shedding, coat (compared to Bernese Mountain Dogs). Bernedoodles make excellent family companions and are great for families with other pets and kids.

Bernese Mountain Dogs talents are tracking, herding, guarding, search and rescue, carting and competitive obedience. Their positive and happy go lucky attitude make the Berner wonderful for families with children. They are very intelligent and easy to train. Bernese are good-natured dogs, but can sometimes be slow to mature. Bernese Mountain Dogs are typically friendly with strangers, other pets and dogs. The Bernese Mountain Dog is fabulous dog for family companions which makes them perfect for the Bernedoodle combination. 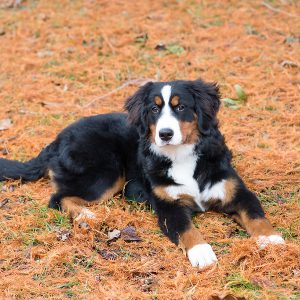 History
The Bernese Mountain Dog originated in the Swiss mountains; their namesake is the Canton of Bern located in west-central Switzerland. Bernese were a very multifaceted breed used for draft work to pull carts, drive cattle, as companions, and to guard farms. At the end of the 19th century, several other working dog breeds were being imported to Switzerland, which decreased the numbers of the Bernese. In order to protect the breed, a group searched for the remaining dogs. They found Bernese Mountain dogs in the valleys of the lower Swiss Alps and promoted the breed in Switzerland and Europe. Thanks to their tireless efforts the Berner lived on and was introduced to America in 1926. In 1937 the breed was officially recognized by the American Kennel Club (AKC).

Poodles are fun, intelligent, fast to train and easy keepers. Poodles are loyal and bond quickly with their family members. They are well-known as excellent dogs for people with allergies because the hair does not shed. Their non-shedding coat and fabulous temperament is one reason they are so popular in crossbreeding. Poodles are excellent family companions and contribute many wonderful qualities of the Bernedoodle breed.

History
The Standard Poodle is one of the oldest pure bred dogs and its origin, while popularly thought to be French, is German. The name poodle along with breed is believed to have originated in Germany. Despite the poodle’s pop-culture reputation as pampered lap dog, poodles come from a line of hard-working sport animals. The name poodle came from the German Pudelhund or Pudel (which in English means “puddle”) meaning “to splash about”, and the word Hund in German means “dog.” The poodle became standardized in France, where it was considered and worked as a water retriever. It was the poodle’s popularity in France which solidified it as the national breed.

No one knows the poodle’s true origins.  However, one popular theory holds that the poodle’s early ancestor was an Asian herding dog that traveled west with tribes of Goths to eventually become a German hunting animal; another theory of the breeds origin as it finding its way from Asia to Portugal in the 8th century with the Moors.  What we do know is that the earliest ancestors of the Poodle were said to be curly-coated dogs of central Asia.  The poodle’s history has seen rough-coated water dogs claiming to be associated with the poodle’s ancestry.  The first dog breed laying claim was a type of curly-coated dog known as the Barbet, which was seen throughout Hungary, France, and Russia.  However, it was the German strain of the dog exerted maximum influence on the Poodle we know today.

Poodles are retrievers or “gun dogs,” and are still used by hunters in that role.  Their coat is moisture-resistant, which helps their swimming. In France, the dog was also named “chien canard or caniche,” indicating its duck-hunting qualities.  While primarily considered a water-retriever, the poodle was and still used as a guide dog, guard dog, military dog, circus performer, and wagon puller for entertainers.  To this day, because the original Poodles were water dogs used for retrieving, their conformation and the pattern and texture of their coats reflect the purposes for which they were bred.  All of the poodle’s curly-coated ancestors were known as good swimmers. 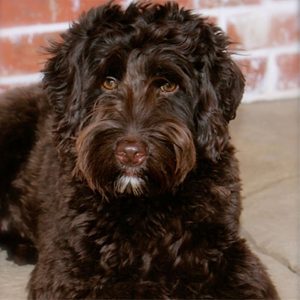 History
In 1989, Wally Conron of the Royal Guide Dog Association of Australia produced the first known litter of Labradoodle pups in response to a visually-impaired women’s need for an allergy-friendly dog (due to her husband’s allergies). In response to the request, 33 samples of poodle hair and saliva were sent to the couple to see if the poodles would cause an allergic reaction to the husband’s allergies; all of the poodle samples sent still bothered his allergies.

Conran decided to cross a Standard Poodle with a Labrador. Coat and saliva samples from the three pups in the Poodle and Labrador litter were sent to the Hawaiian couple for trial. One of the three samples was allergy-friendly. The allergy-friendly dog, Sultan, was then trained to become the service dog for the blind woman. Sultan was not only a service dog, but also the beloved family companion of the couple.

After Conran’s initial efforts and to advance the breed farther, Tegan Park and Rutland Manor in Australia began breeding Labradoodles. These pioneers were determined to produce litters with consistent conformation, coat type, and temperament. As a result, a number of other dog breeds were bred into the Labradoodle lines: Irish Water Spaniel, Curly Coat Retriever, American and the English Cocker Spaniel. The Australian Labradoodle is now considered to be a cross between the Poodle, Cocker Spaniel and Labrador Retriever, while the Labradoodle is a cross between the Labrador Retriever and Poodle only. The Australian Labradodle consistently produces allergy friendly coat types as well as exceptional temperaments.

Information republished with permission from Australian Labradoodle Association of America.